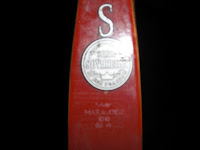 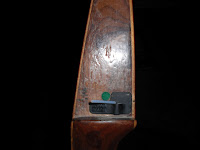 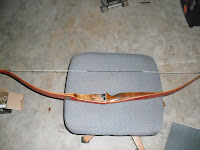 ﻿
The Old Bow Project started 1/24/12
Journal notes:
Goal: Hunt and kill a deer with dad’s bow.
The bow is a Ben Pearson Silver Sovereign Silver Marauder. It is 52” long and has a 50 pound pull at 28”. My draw length is about 30” so it will probably stack about 2 more pounds. The silver Marauder is a recurve bow.
It is made of wood and fiberglass. The handle or riser at it is called is made out of wood. The limbs are laminated wood and fiberglass. Making a recurve bow is a long and involved process that takes practice and determination. All of the plans I have seen say in so many words, that if you make a good bow on your first try, buy a lotto ticket because you have luck on your side. I remember when I was very young and dad was first getting involved in archery he bought a bow from a guy in phoenix who was supposed to be a great bowyer. Dad brought the bow home and could not wait to show it off to his boys. He strung the bow up and we were all very impressed. He grabbed the bow and began to pull the string back to full draw length; I remember hearing a funny sound. Dad released the string; I think he heard it too.  He looked the bow over closely admiring the beauty of the lines and the matching wood grains.
The bow was beautiful. With confidence regained he drew the bow back to full draw. By way of a tremendous crack the bow turned into a grenade, exploding right before our eyes. Everything happened so quickly that it was hard to grasp the ramifications of the event. Just thirty seconds before dad was holding a beautiful piece of craftsmanship that elicited pride. Now in his hands he held a mangled piece of fiberglass and wood dangling from a string like a grotesque marionette from some nether world.  He went over the event a few times to make sure he had done nothing wrong.  After a few minutes he was confident that he had followed the steps for stringing and pulling a bow, which was a futile activity in its self.  The only damaging thing that you can do during that process is dry fire the bow, which is to let the string go without an arrow in it, and that did not happen.
Dad called the guy and explained what happened. The man was slightly perplexed but said sometimes that happens. He told dad to bring it back and he would give him another one that he was building. I do not remember the time frame but probably several weeks later we were once again standing in the living room and admiring the bow. Dad strung the bow, grabbed the string pulled the string back, and once again we witnessed an explosion of wood and fiber glass. This time dad was ticked. He called the guy and let him know that another one of his bows was coming back in a small box. I remember that dad said the guy was a little suspicious but was willing to take the bow back.
Dad drove over to phoenix and was ready for any challenges, but after presenting the pile of wood, fiberglass and string the guy had nothing to say. Dad came back with the Ben Pearson Silver Sovereign, and things were good after that. Needless to say dad never recommended this guy’s bows to any of his friends.
Posted by Cliff at 6:02 AM