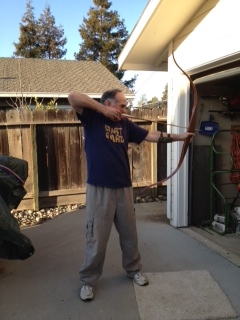 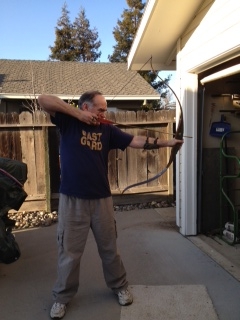 3/5/12
I have been shooting several times since the last post. Fingers are strengthening, my eye is getting better. I love the old bow. It is very smooth and fun to shoot.
I have been looking on the internet for a deal on a Bear bow. This morning I queried Craigslist for recurve bows and came up with a bear grizzly, 55 pound pull, 58 inches tall. The guy who had it lives in Placerville. It is a two hour drive from where we live, but the bow sounded good, so we took off after church. The seller lives way out of town and up a hill. We met him at the base the hill he lives on. As soon as I saw the bow I knew I wanted it. It had a few light scratches on it but was in excellent shape very well kept.
I gave him his money and we drove home.  At home I had a few chores to do so getting to fire the bow was delayed. After finishing the sprinklers and planting blueberry bushes, I moseyed into the garage and had a look at my new addition. I inspected the bow once more, looking very carefully for any cracks in the lamination I may have missed on the first inspection. The bow is 58 inches long, but with the exaggerated curve in the limbs it looks short.  I strung it up and waxed the string. I was not happy with the string.  There is a small section where a few of the strands are frayed pretty badly and much of the serving on the top tip is loose.  However it did not look like it would let go today, so I decided to give it a few test fires.
I followed the procedure recommended by  www.thisoldbow.com and pulled the string back a few inches at a time listening for any cracking sounds. I did not hear any unusual sounds as I reached full draw. I knocked an arrow drew back to full length and let it fly. Wow, what a rush it is to fire a thirty five year old recurve bow for the first time. I used the same arrows as I used for dad’s bow. At fifty-five pounds, the grizzly is rated at five pounds heavier than the Silver Sovereign.  After A half dozen arrows I felt the weight difference.
All commercially manufactured bows  are measured using twenty eight inches as the standard anchor point; this reference point was set by the Archery Manufacturer and Merchants Organization or AMO, It maybe that the average person has a draw length of twenty eight inches; however my draw length is thirty inches.  Most people will tell you that a bow will stack 2lbs for every inch over 28inches, but I think it varies from bow to bow.  In this case I think that it is stacking about 2lbs per inch.  It feels very stout and shoots great.
The top picture is me shooting the Ben Pearson bow, and the bottom one is of me firing the Bear Grizzly. You can’t tell, but I'm gritting my teeth and my arms are shaking, while asking Sheila to please hurry and take the picture.  I am planning on going to an archery shop tonight and buy a couple of strings and maybe a better arm guard. That Grizzly has a good slap. More to follow.
Cliff
Posted by Cliff at 6:13 AM