3/11/2012
Sunday morning time change, it is 7am and still dark. I shot yesterday at the new target purchased from the big sporting shop in Manteca. I found that I was able to relax a bit more and not worry about bouncing arrows around inside of my shop. It is two and a half times the size of the target I was using. I bought new bow strings for both bows. I was unable to get exact matches to the strings that were in place for both bows.
Dads bow, the Ben Pearson had a string that measured about 59”. I found one that was 58. Since the string that was on the bow was homemade, there could have been a difference in it from the original string. There is no telling how many strings have been on that bow in its life time. Every string that was on it since the time that dad bought it was homemade, so I am guessing there is probably a little leeway that I can use. The brace height for the average recurve is around 7 ½ to 8 inches. The brace height  of the Silver Sovereign, with the new string,  is 7 ½ inches. Brace height is measured from the deeps part of the grip to the string.
The Bear Grizzly had a string of 52 inches. The closest string to that in the store was 54 inches.  I have not measured brace height for that one yet because I need to install an arrow rest before I place the nock set. The Grizzly had a neat looking arrow rest that was glued on to the shelf of the bow, but someone had tried to peel it off and bent it. I went ahead and removed it and the old glue. The Ben Pearson Bow has a rest on it that is called a “Flipper”. It is installed just above the shelf of the bow and at the edge of the site window closest to the string. It is a nice rest because it folds up as the arrow flies through the rest.  I found one in my gear box the other day. I have had it for years and do not know if the adhesive is still good, but I am going to try it this afternoon.  The two inch difference in the string for the Grizzly can be made up by twisting the string.  It is recommended that you use no more than 20 twist. I will check brace height and see how much I need to make up.
I found instructions that dad had sent several years ago on how to make bow strings. I have his string jig and I am going to make some strings. I made one for the bow that dad and I built and it turned out ok. I found his old shooting glove with the instructions for how to make strings. The glove is handmade and very cool looking. I remember it from years ago. Dad never bought anything that he could make. 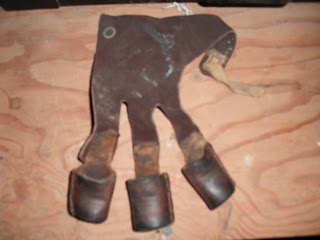 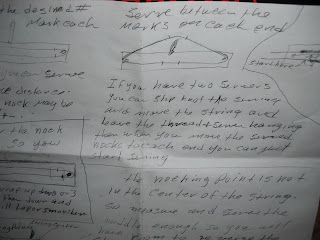 The instructions are all hand drawn by dad and very accurate. I had never made a string before and my first attempt turned out all right. Below is a second little note that he added. He said he wished he could come up and help me sort out “this mess” I think he was referring to the above sheet. 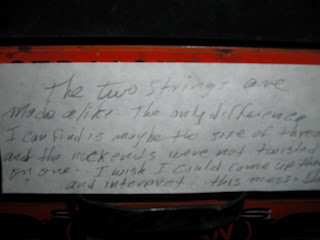 With the other things I found I found this string server that he made. It is out of some metal that was laying around his shop. It works very nicely for applying serving to the bow string. Beside it is a picture of one of the bow strings that he sent as a guide. 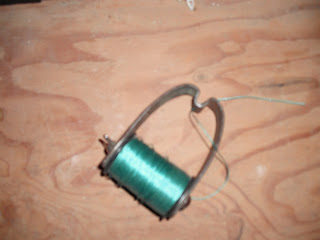 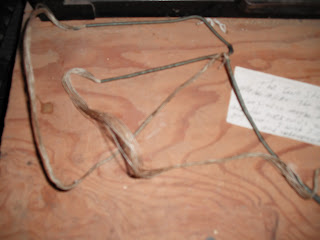