﻿
﻿
We had a great day trip to the mountains up highway 4. The temperature was in the low 40,s to high thirties. We took a trip to Ebbetts pass at 8730 foot. We drove back to the 5500 foot level and did some scouting on the road to Bear Valley. We took a forest road marked on the map as 7N35. After a small family argument as to whether the PT Cruiser was made to go off road or not we took a hike. 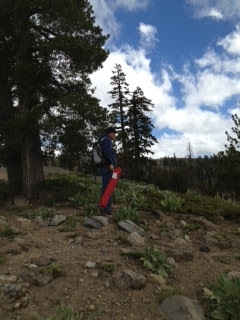 You can see the wind blowing through the cabbage patch. We covered about a mile and half. It took about an hour. Most of the walking was up hill. The progress was slow. I realized that besides preparing my bow I need to start preparing my out of shape body. 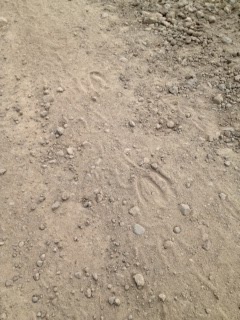 These were the best tracks we saw. All in all it was a good trip. I added to the list of things I need to do to get ready. Just a little off subject, it was confirmed I was drawn for D-5. I got a preference point for putting in for A-20. In a few years I may get a chance to hunt one of the premium hunts. Until then, we will be going back to D-5 for more scouting. Next time I will probably spend the night and glass early in the morning. I still need to find a likely spot to place a blind or tree stand. We saw doe, but I would like to see something with antlers that will make all of the effort worthwhile. Although I have hunted before without ever seeing a buck, it makes it so much more exciting and offers more of a reason to hunt if you can see something legal.

we thought we were isolated, but as this next video shows we were mistaken. 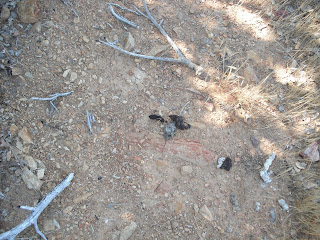 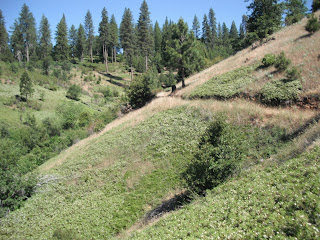 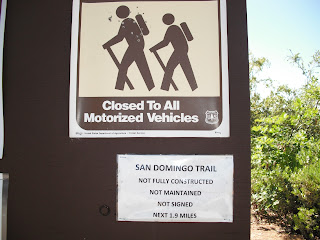 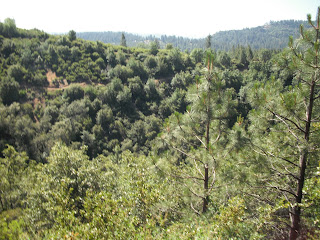 Today was a great day. It felt good to “get in the woods” with the intent of preparing to hunt. I bought my hunting license and applied for deer tags last Sunday. I put in for zone A-20 for my first choice which is an archery only zone along the California/Nevada border near the Pacific Coast Trail. I probably won’t get drawn for it because they only issue one hundred seventy tags, so I will just a get a point for next year. More than likely I will be hunting in D-5, and will be hunting along highway four. I have hunted D-5 before, but much higher up near Alpine lake.

Today I drove to a road between Murphys and Arnold called Avery Sheep Camp Road. I got a tip from the forest ranger at the station near Arnold, that I could access the forest land via that road. The trouble with this spot is that public land is hemmed in by private land. Getting caught hunting on private land is very bad. Most people who have land are unwilling to allow hunting on their land. Here is a picture that demonstrates why people with land are reluctant to open it up to the public. The sign is shot to pieces by some junior genius with a shot gun and no sense. So actually, I do not blame ranchers and others with investments in equipment and land for trying to preserve what they have. 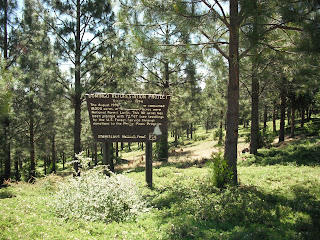 So, ideal spot must have two important components; it must be on public land and have deer. Today’s efforts uncovered public land, but I am not sure of the deer population. I saw a few random tracks as displayed in the picture below. There is a green leaf near the bottom right of the picture. Move your eyes straight up to a little stick, follow the stick to the left, it is pointing at one of the random tracks. There is a ledge about four feet high to the left of the track. This deer came off the ledge out of thick brush, headed directly across the road back into thick brush. I am not sure how much pressure they face back in this area but something seems to have them scattered. There is a picture above that looks like a mouse lying near a pile of dung. That is what it is. I think it is bobcat poop. The ground is so hard and rocky that it is difficult see tracks. Before I write this area off though, I will make one more trip in the early morning and glass as the sun comes up, hopefully I will see deer, if not my next spot will be higher up. 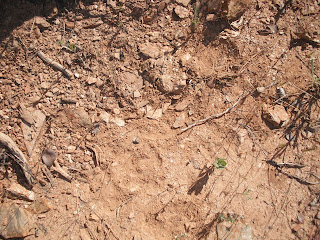 Tomorrow the plan is to finish putting away dad’s tools and start fletching arrows. I have about three dozen arrows with tattered fletching. I think that may be part of the reason I was getting such large groups, and having arrows just fly off to outer edges of the target. I don’t blame all of the miss-placed shots on bad fletching; some of the errant arrows were caused by bent shafts, and weak fingers. There is more to come later.

Cliff
Posted by Cliff at 6:44 PM No comments: