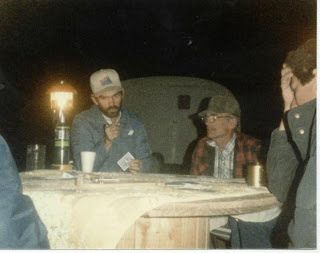 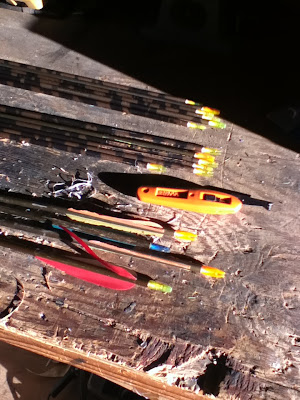 I started the old bow project as a way to remember my dad and his influence in my life. He enjoyed archery and passed the sport along to me. My dad liked to do things his way, and was not in most cases, a follower. This character trait can be seen in the naming of his children. His name was Abbott, and as providence would have it, he married a woman name Beverly. To most people that would not be anything of importance, but to my dad it was a challenge. He suggested to my mom that they name their first son using the letter C. My mom accepted the challenge, and the legacy was established. I was Named Clifford, Danny flowed me and then Ernie. Nine and a half years later the fourth boy was born, and of course his name was Fletcher, after the sport he enjoyed. There are other tail stories surrounding the naming of the fourth child, suffice it to say my dad liked archery and that is how my brother got his name. Here is a picture of us all grown up. Right to left C,D,E,and F. 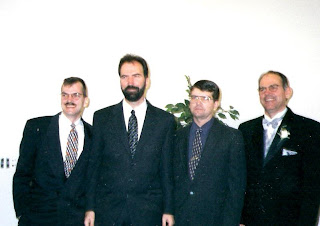 My dad told a story of a boy who lived across the street with a very unique personality. As I remember it, he wore very thick glasses and could not whistle so he always said “whoop whoop” to get your attention at a distance. He used to call my brother Fletchin, so that kind of stuck with me. I don’t think Fletcher particularly likes the name, but I guess that is just one of the privileges’ of being the older brother. I did not get to annoy him much growing up because I was already out of the house by the time he was of age to be irritated, so I get to do the irritating now. This picture ought to really irritate him. It shows the age difference pretty good. Thats fletchin peeking into the package and me on the left with Ernie looking on. 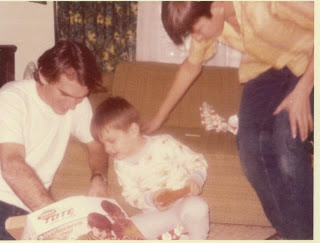 Anyway, I did some needed fletchin’ this weekend. I dug into some stuff I had bought a few years back from a frustrated archer who wanted to unload much of his stuff, and found three fletching jigs. The two Bitzenburger jigs are very nice jigs and do a good job of fletching. They do one vane at a time so they are a little slow. I also found a three vane jig made by Cabelas that I am going to sell. My favorite jig is the Arizona EZ fletch. I turned out 10 arrows with the EZ flectch to three arrows with both Bitzenburgers. 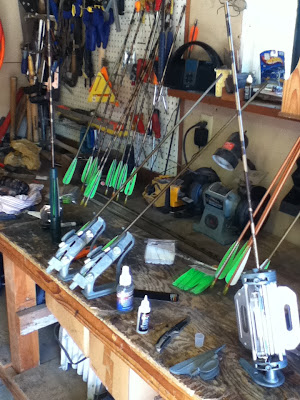 I shot all of the arrows at the same time and could not tell the difference in flight. I had three arrows sail way out of group, but after retrieving them and re shooting, they flew perfect. They sailed off because of my release. I am a little behind the curve in shooting so I need to step it up. 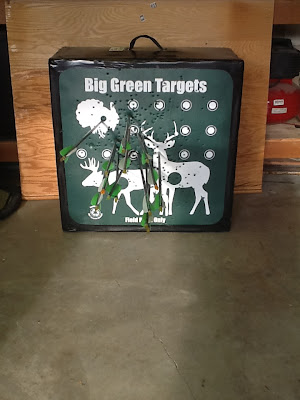 Opening day is one month away. Shooting is one of several important tasks I need to continue doing. The most important task is still not accomplished, and that is finding a place to hunt. I have some work cut out for me over the next few weeks. I am on call this weekend so I will not be able to go scouting until the last weekend in July. I will take some pictures and post after the next scouting trip. Hopefully the pictures will contain good fresh tracks and maybe even a shootable animal. So until the next post I will say good bye for now. Thanks to Danita for the old Pics.