This project has been an adventure in preparation and a journey back in time as I remember my father and his love for the outdoors. Driving up the winding, tree covered highway 4, with Sadie my mini Schnauzer, I spent some time talking with my Heavenly Father. In first Peter we are exhorted to humble ourselves under the mighty hand of God. Humble is exactly what I felt driving under the canopy of huge pine trees. And humble is the only way to describe the feeling of going into a new area to hunt deer. I believe that God cares about me and the things that are important to me, and that I am encouraged to cast all of my cares upon him, so I did. I asked God for his blessings and the chance to see legal deer. Within minutes of praying I saw a forest road that looked like a possible place to hunt. I turned off at the next turn out to write the number down. Putting the truck in park I grabbed my note book and jotted down the number. Preparing to leave I looked across the road and this is what I saw. 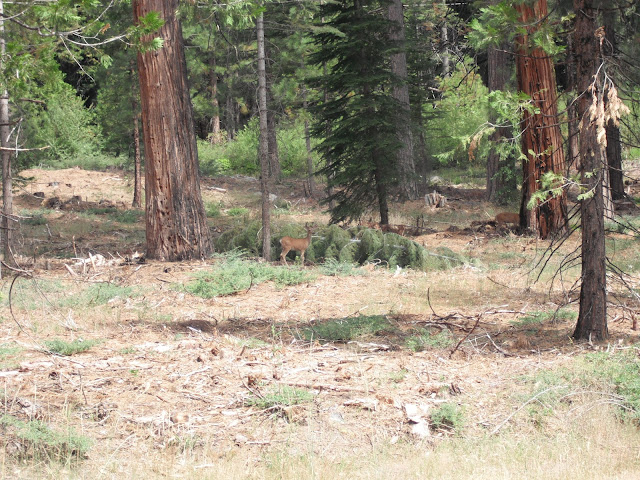 Two bucks, the closest one is a forked horn and the one with his back to the camera is a spike. I know they are small, but that was a very encouraging thing to happen, and made the woods seem just a little smaller. I took a couple more snap shots of them and headed up for Mosquito Lake.

Stopping off at the ranger station I got a fire permit and talked a little with the ranger on duty. She gave me some good information about the Forrest roads and camping out side of camp grounds. I told her that I was planning on staying at mosquito lake; she said well no I probably won’t because it fills up very quickly. I should have listened; it would have saved me close to a half hour drive. Mosquito Lake camp ground was full and there were twenty cars parked along side of the road. Carefully making my way out of the busy area, I headed back down the mountain. The Forrest Ranger I spoke with told me about a couple of Forrest roads that cover a lot of area and are passable with a two wheel drive vehicle.

Turning off onto the Forrest Road I drove for about 6 miles. Just before the road made a hair pin, left hand turn there was a small dirt road to the right. I took it and followed it back for about two hundred yards where it turned into a wide cleared area with a fire ring. I thought the fire ring had been made by some industrious camper, but later found out that the Forrest service prepares these places for free camping. Sadie and I had a bite to eat and then headed up the hill to find a place to sit and glass. Sadie was very reluctant to follow and I did not know why until later. When I looked at her closely she was covered from head to toe in cockle burs. An hour later we had most of them out. I apologized to her and promised I would not make her go through that again. She accepted my apology and thanked me for getting the burs out. I wandered around for awhile trying to get the lay of the land it was covered with Christmas trees, and brush. The brush is what the deer are grassing on. I will have to find out what it is called. 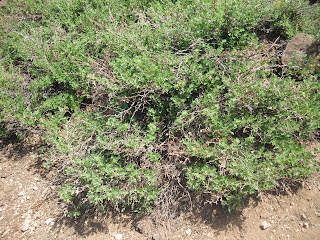 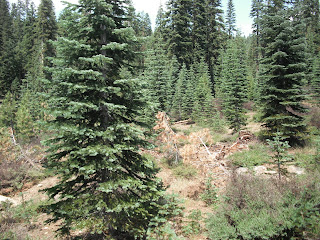 After an hour or two we head further up the Forrest road. We ran across a herd of cows a few miles up. We heard them before we saw them. They all had cow bells on and what a racket they made, it sounded like pots and pans banging together. We found a place to make camp and had dinner. Sadie enjoyed hers very much. Mine was okay; I had an MRE and thought about my little brother in Afghanistan. 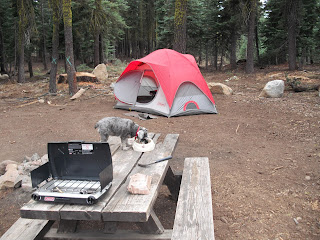 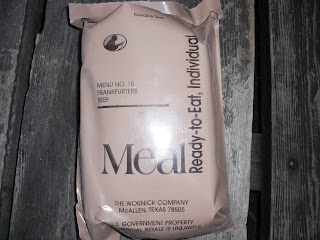 After supper Sadie and took off exploring on foot. We found a 4x4 road and followed it for a few miles, all up hill. We sat on the side of the road for a half an hour or so and saw deer cross about one hundred yards in front of us. We walked up where they crossed and I found a place to set up my blind. That was a relief. I feel like I have two places that I can set up on opening morning, where animals are. Sadie and headed back to camp and retired early. We had thunder and lightning for an hour and then about nine pm it started to rain and rained until eleven pm. It was cold and I did not sleep very well, which was actually a good thing. I know now that I need to bring more warm clothes and blankets. So all in all it was a productive trip. Here is a short video of Sadie and I on our way down from our last hike.


Next entry will be a little closer to D-Day. I still have much work to do on getting my groups of arrows smaller. Until next time,